McCalls M7874 and My Beef About Bad Instructions

I'm still in my lagniappe stage after my Chanel Style Jacket. I have another bouclé ready to go (from my friend Alice at Mendel Goldberg Fabrics in New York), but I'm not ready to cut into that yet. So this weekend I decided to make a top pattern that's in my stash, but slightly out of my wheelhouse: McCalls 7874. 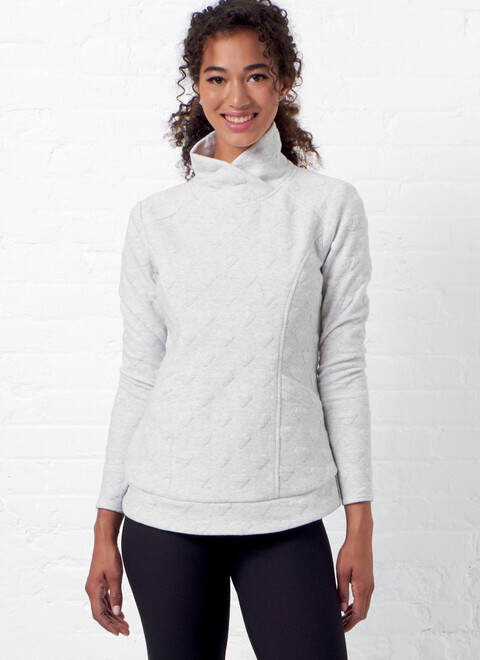 This is a pattern for athletic tops and leggings. The tops have different neckline and sleeve hem treatments. The tops all have kangaroo pockets and shaped, overlapped hem bands. I made view B in a size 12 at the shoulder, expanding to a 14 at the underarm, with a full bust adjustment.

The pattern shows a heavy knit, but I wanted something lighter weight, so I used Tie Dye Double Brushed Jersey - Teal Tones (still available as of this writing). I used Mettler Seraflex Thread for the hems and anything that required topstitching. Other than that and a couple of scraps of silk organza (see below) it was quite straightforward.

I used the serger for the major seams. I used Seraflex Thread for all the topstitching to retain the flexibility in the seams. The pattern instructions tell you to stay stitch the inside corners of the side front. Because my fabric is so stretchy in both directions, I reinforced the corners with small scraps of silk organza. Now, About the Instructions...

You know, there is very little that sets me off like instructions that are just plain wrong. For example, in this pattern, one of the fun design attributes is a kangaroo pocket that extends from the side front across the center front, under the front pattern piece. Fortunately, I have enough experience that I don't really look at the instructions (and I don't say that in a snotty way - it's just that I've been at this long enough that I'll take a cursory look at them, then pretty much do my own thing). But I did note the fact that they had a completely wrong picture to go with the instructions.

And Here's Why That Pisses Me Off

Because not everyone has 40-odd years of experience. I teach, and so I know that newbies and people who aren't experienced will look at that picture and think, "OMG, I cut it on the fold, and it doesn't belong on the fold, so I need to trim off 5/8 inches in the middle!"

And if they do that, it will be a freaking disaster. And they will blame themselves, when the fault lies entirely with the pattern company. And BTW, McCalls couldn't even be bothered to use the spell checker that would have told them that you cut 1 ON fold, not OM fold (thank you for pointing that out, Nancy B.)

After complaining about it on Instagram and Facebook, I took several deep breaths and carried on. I used my Juki serger to sew all the seams, and I used my Juki industrial for all the top stitching and hems. Really, it was pretty easy, just rather aggravating thanks to the instructions. But it turned out okay. Here are some pictures on Shelley. I'll post pictures of me in it this week.